In this article, I'd like discuss the painting I've used as the primary image on this website. It was painted in 1777 on Captain James Cook's final voyage. It shows both the Resolution and Discovery anchored in the bay, set within the Adventure Bay landscape.

On 26 January, on the first stage of his third voyage to the Pacific, Cook anchored in Adventure Bay, Van Dieman's Land (now Tasmania).

Cook’s voyages aimed to extend British knowledge and imperial and economic potential. They had the combined objectives of undertaking the astronomical observation of the Transit of Venus, visiting unknown lands and people to determine whether there was potential lands for acquisition, collecting botanical and zoological specimens for scientific observation, and searching for the mythical southern continent Terra Australis Incognita (great unknown land of the South).

As with many British journeys, a objective, particularly from the late 1800s, was also to chart and record observations, not only of the lands they discovered or visited, but also of flora, fauna, and any communities they met.

These were generally recorded by officers trained in mapmaking, any professional artists on board, and/or amateur artists amongst the crew or passengers.

On 26 January 1777, on the first stage of his final voyage to the Pacific, Cook anchored in Adventure Bay, Van Dieman's Land (now Tasmania).

Although he had been aiming for New Zealand's Cook Strait, Cook anchored at Adventure Bay because HMS Resolution's fore-topmast and main top-gallant had been damaged in a gale and needed repairs. See notes below from Cook's and others' journals. (i)

Adventure Bay had been named by Captain Tobias Furneaux, who commanded the HMB Adventure on Cook's second voyage (1772-75). Furneaux was the first British navigator to put into the bay after becoming temporarily separated from Cook during their eastward Indian Ocean passage. He is also attributed with drawing the first Tasmanian landscape: a sketch of the south side of Adventure Bay, Bruny Island in 1773 (although drawings of Tasmania by Europeans began with the charts and coastal profiles of Abel Tasman's 1642 journal) (ii).

Peter Fannin, as master of the Adventure, also made surveys, and drew charts and coastal views of Adventure Bay during this voyage, including this chart and watercolour of Adventure Bay(iii).

On Cook's third voyage, a principle artist was included as part of the ship's company.

John Webber's responsibility was to provide drawings of the costumes, houses, and customs of the people they visited. 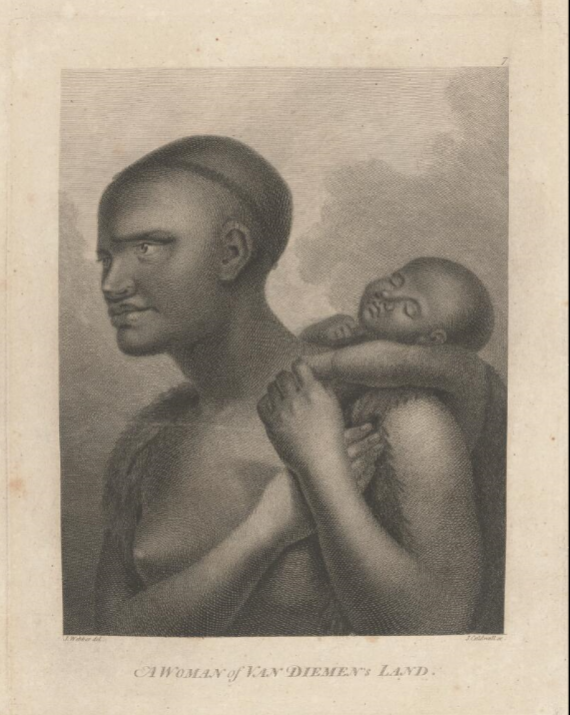 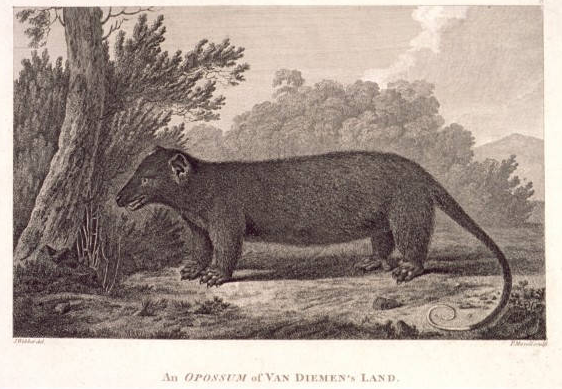 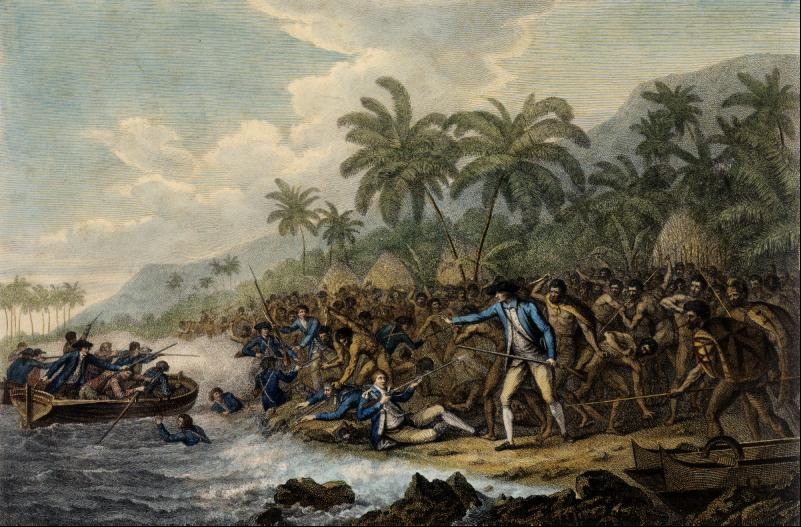 William Ellis joined the Discovery as the surgeon's mate (there is no information about how or why he chose to do this) and later transferred to the Resolution.

William Webb/Wade Ellis was born in 1751 or 1756 in Cambridge and became a watercolourist and draughtsman.

According to Professor John Robson from the Captain Cook Society and Waikato University library (who has written extensively about Cook), "Ellis was supposedly educated at Cambridge University and St. Bartholomew’s Hospital, London, but no evidence for these claims has been located. The quality of his bird paintings, however, shows evidence of some scientific education or training. The way he drew studies of parts of the birds would interest naturalists back in Britain. The written descriptions in Ellis’ notebooks further confirm he had a scientific education, and a working knowledge of Latin".(iv)

David Samwell, surgeon in Discovery, described Ellis as “a genteel young fellow and of good education”.(v)

The painting of both the Resolution and Discovery in Adventure Bay by William Ellis is important because it is one of the few surviving original works in which Cook's ships are painted in Australian waters, and which include Australian landscape. (See earlier blog about Sydney Parkinson.)

The painting shows the Resolution at anchor on the left, apparently newly repaired, with the slightly smaller Discovery to the right. (see detail below).

As was common for shipboard artists, it is a reasonably realistically portrayed view, showing a varied landscape on one side with trees and water on the other, without revealing the specifics of the topography or vegetation of the area. Note the limited watercolour palette available, used by naval chartmakers, which was generally limited to two greens, two browns, crimson, blue and black.

Some other paintings by Ellis are below - from the Natural History Museum in London. 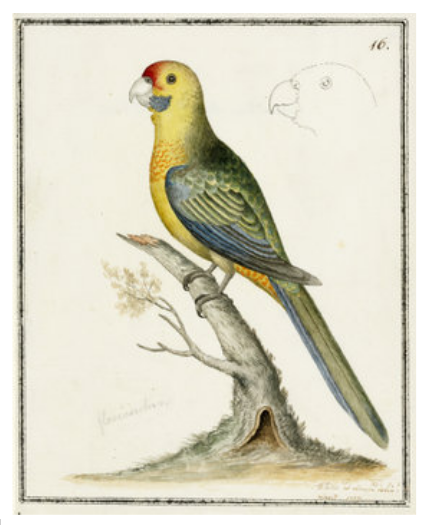 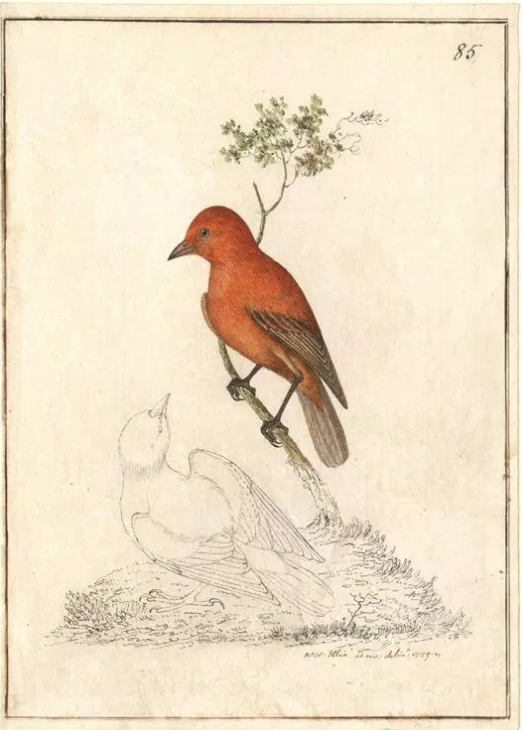 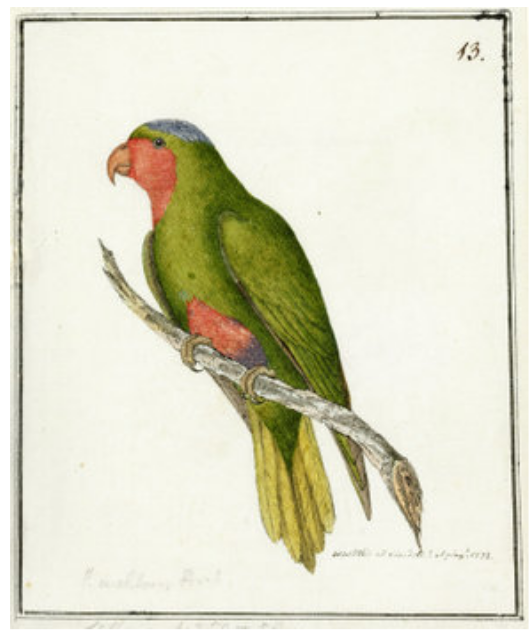 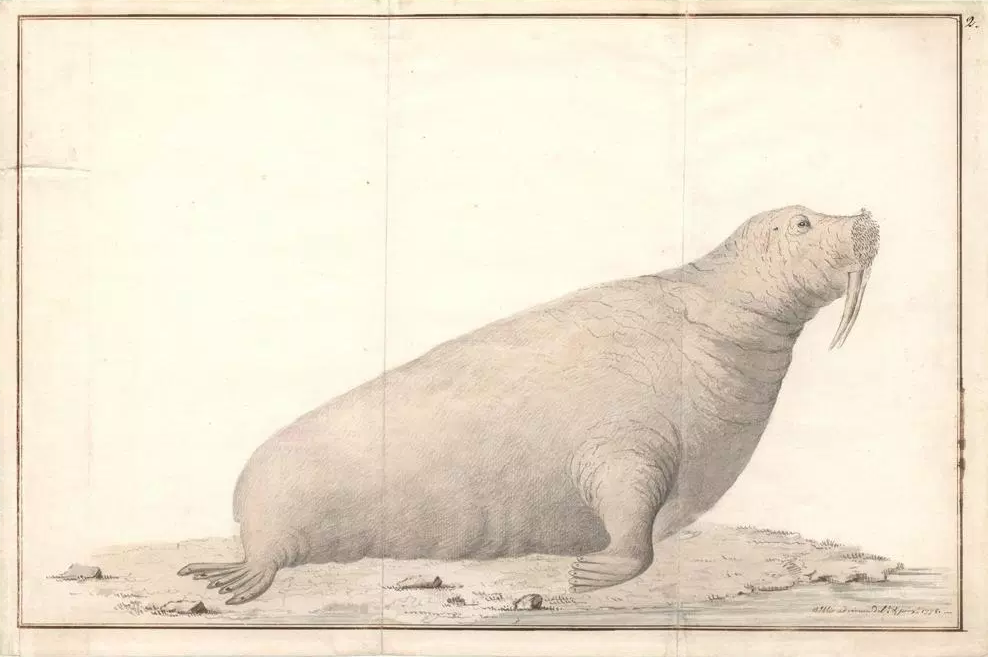 Charles Clerke, Captain of HMS Discovery commended Ellis to Joseph Banks in a note "I must beg leave to recommend to your notice Mr Will. Ellis one of the Surgeon's mates who will furnish you with some drawings & accounts of the various birds which will come to your possession, he has been very useful to me in your service in that particular". (vi)

Unfortunately no commercial relationship between Ellis and Banks developed. However, he later accepted an offer of 50 guineas to write an account of the third voyage which he accepted.

His work, An Authentic narrative of a voyage performed by Captain Cook and Captain Clerke in His Majesty's ships Resolution and Discovery during the years 1776, 1777, 1778, 1779 and 1780; in search of a North-West passage between the continents of Asia and America, published in 1782, sold well, even going into a second edition and being translated.

In the slideshow below you'll see the pages from the publication that relate to his time at Adventure Bay. 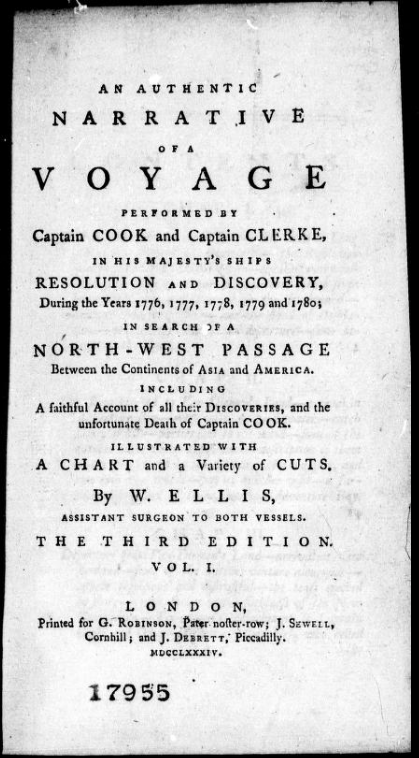 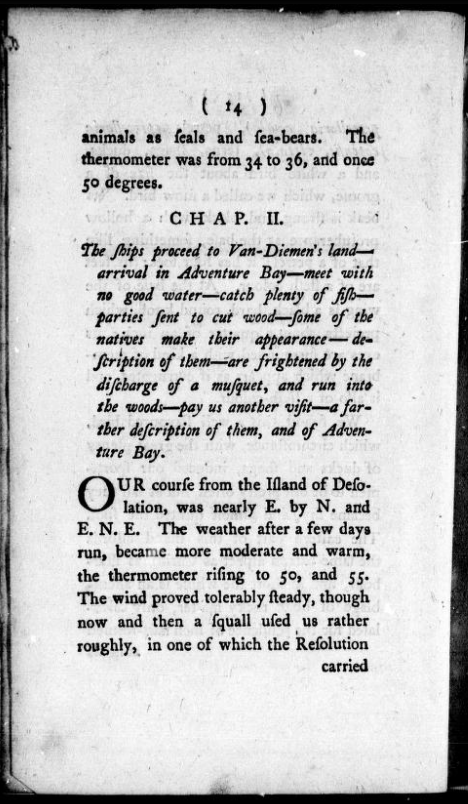 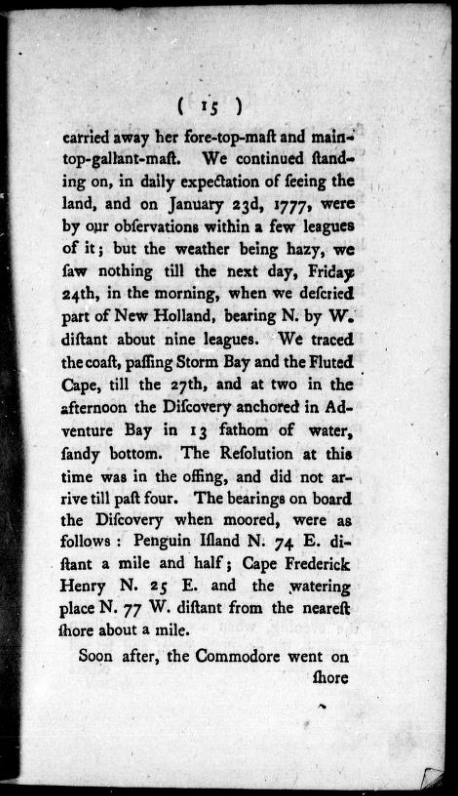 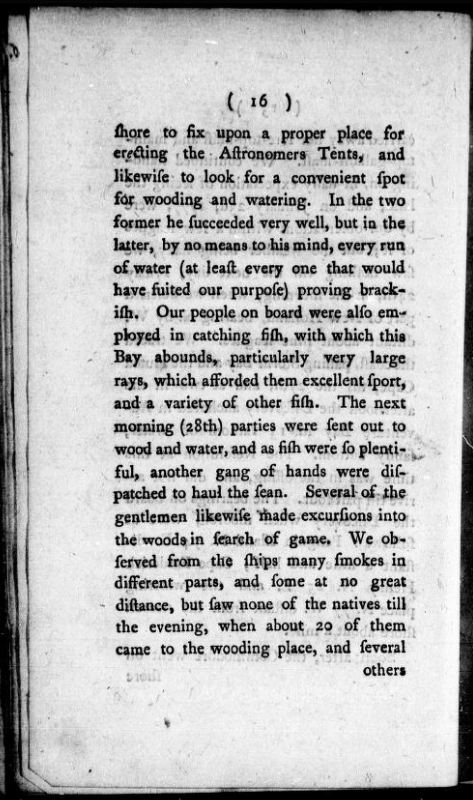 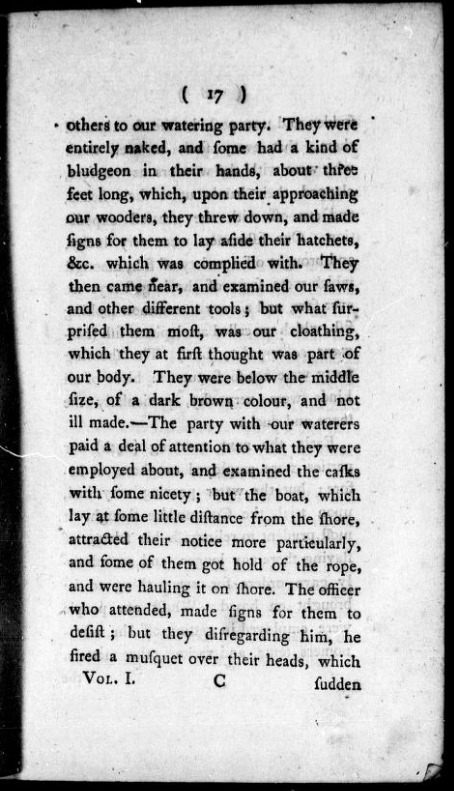 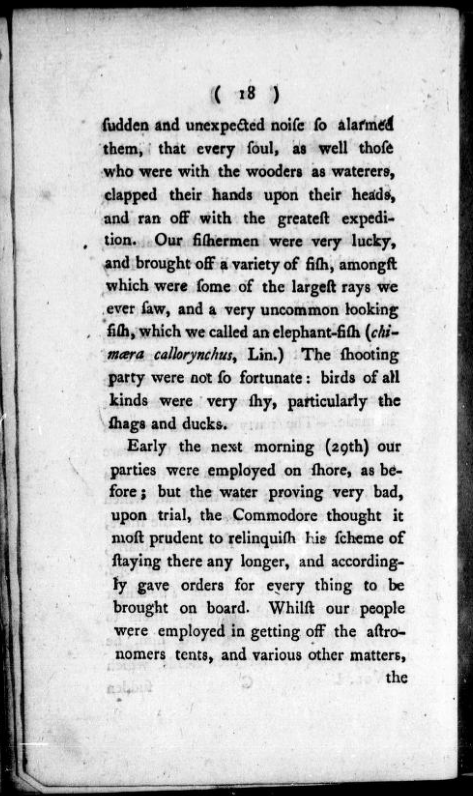 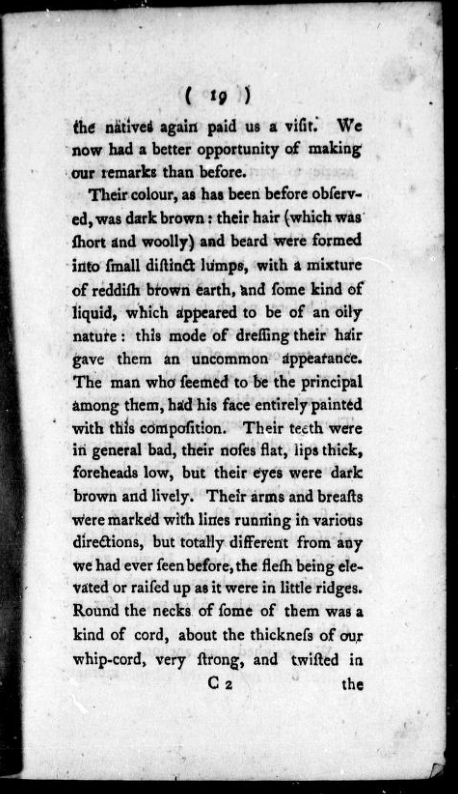 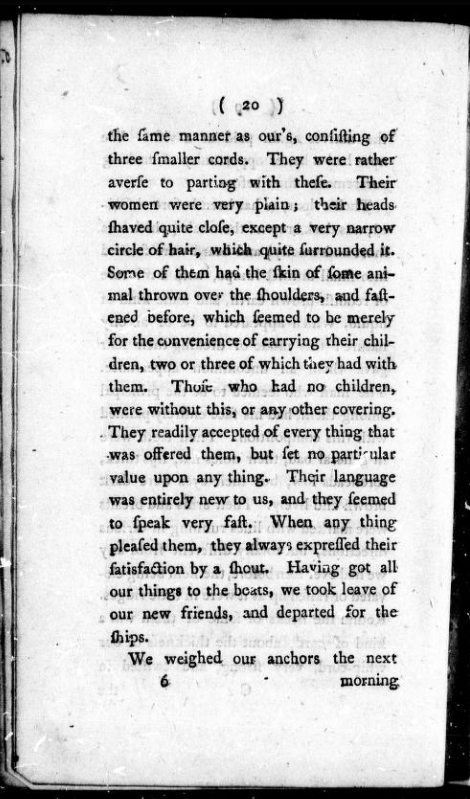 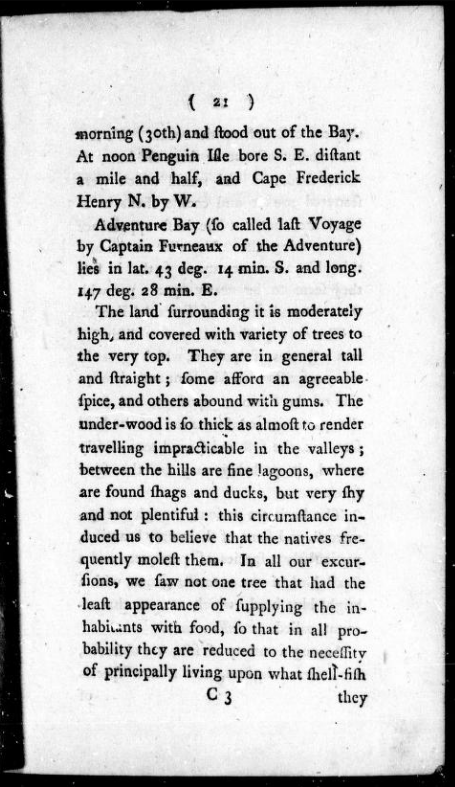 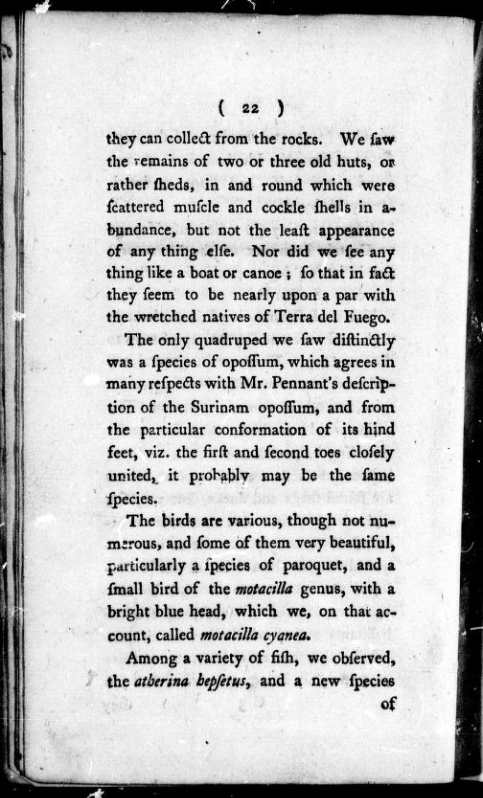 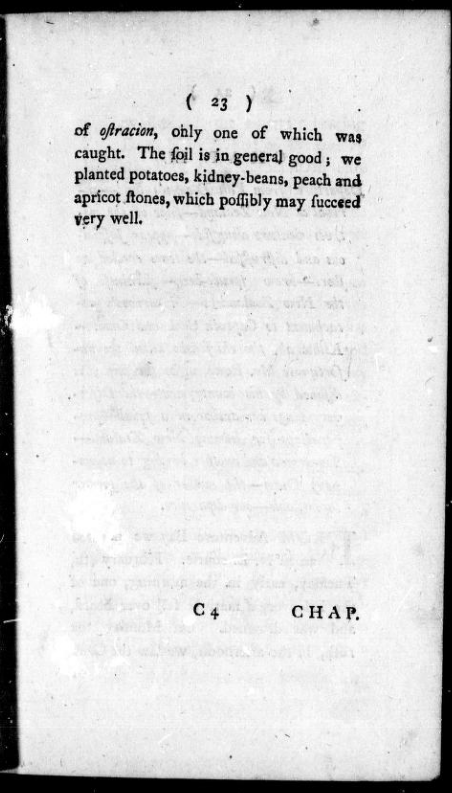 However, according to Robson, it appears that Ellis' reputation was damaged because he had upset the authorities by publishing his narrative without permission, ahead of the official account of the voyage.(vii)

Ellis had made friends with members of Discovery's crew, and as a result secured a position on an Austrian expedition. Unfortunately, however, shortly before the Austrian expedition could depart from Ostend in Belgium in June, 1785, Ellis fell from the mast and died.

Although collections of Ellis’ drawings are held at the Natural History Museum, London, and the Alexander Turnbull Library, Wellington, they have unfortunately remained amongst the least known of material from Cook’s voyages.

You'll enjoy more images by William Ellis at the Natural History Museum in London, where you can form a view about the quality of the work in his short-lived career. You may also enjoy an audio of John Robson speaking at the National Library of Australia in a talk Echoes of Cook.

The Companion to Tasmanian History

Captain Cook Society, including extracts from Cook's and other's journals.

Ellis, William, An Authentic narrative of a voyage performed by Captain Cook and Captain Clerke in His Majesty's ships Resolution and Discovery during the years 1776, 1777, 1778, 1779 and 1780; in search of a North-West passage between the continents of Asia and America, G Robinson, 1782

Joppien, Rüdiger, and Smith, Bernard. The Art of Captain Cook’s Voyages, Volume Three: The Voyage of the Resolution and Discovery 1776-1780. Yale University Press. 1988.

Colonial Art in the Illawarra, NSW